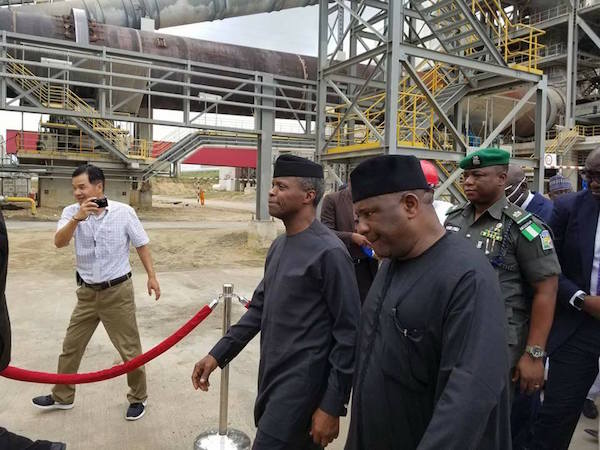 “This project is a big boost to the Nigerian economy and it will provide employment opportunity for the both skilled and unskilled youths of this state and the country at large,’’ he said.
He said the plant’s capacity will consolidate Nigeria’s self-sufficiency in cement and it will be a big boost to the nation’s export capacity.

Osinbajo assured that the federal government would endeavour to make policies that would remove bottle necks but “will identify inhibitions and eliminate them so as to encourage private sector.
In his speech, Governor Godwin Obaseki, said the commissioning of the plant marked the industrialisation of Edo State. The governor added that the vision and mission of the company were in line with the state government’s economic reform agenda, assuring that the state government is ready to make Edo an industrial haven with friendly tax policies.’’

Earlier, the Chairman BUA Group of Company, Alhaji Abdulsamad Rabiu, said the choice to site the plant at Okpella, in Estako East Local Government area of the state, was strategic, saying that “this community has the best limestone in the whole of the country.’’ According to him, the completion of the second line in the first quarter of 2018, will take production capacity to 6million metric tonnes per annum. 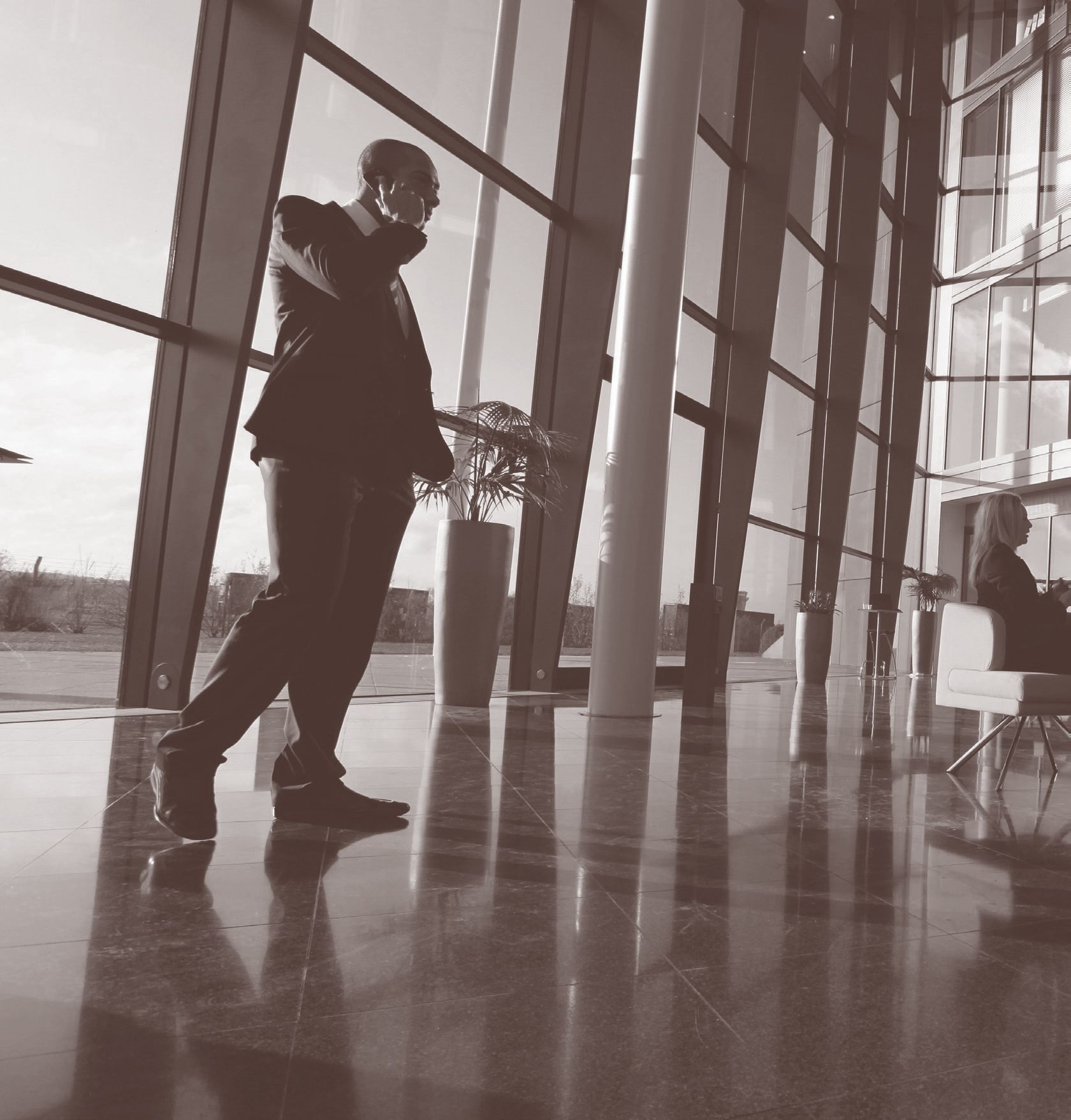 We look at business solutions from the investor’s perspective, not from the point of view of local business interests.

Lagos State Government of Nigeria has said investment in the Lekki Free Trade Zone has hit about N4.55 trillion.

Commissioner for Commerce, Industry and Cooperatives, Rotimi Ogunleye told journalists yesterday in Alausa that the investment includes N3.35 trillion ($11 billion) from Dangote Group and N1.2 trillion ($4billion) from other investors.

Ogunleye said about 116 investors had so far registered with the Lekki Free Trade Zone.

According to him, while some factories are currently under construction, 100 investors have signified their intention to register and situate their business within the zone.

“The Lekki Free Zone remains a landmark industrial project for the Lagos State government. The strategic partnership between the Lagos State government and the China-Africa Lekki Investment Limited (CALIL) in the Lekki Free Zone Development Company (LFZDC) is a testament to the undying resolve of the state government to ensure sustainable industrialisation of the state that would translate to improved job and wealth creation as well as economic growth through the attraction of local and foreign direct investments.

“I am very happy to inform you that 116 investors have so far registered with LFZ. “While some factories are currently under construction, 100 investors have also signified their intention to register and situate their business within the zone,” he said.

The commissioner explained that during the period under review, the Lagos State government further released a sum of N698,478,850 to the joint ventures as part of the state’ equity contribution.

“This is part of the effort to ensure the speedy development of the free zone and honour the state’s obligation to counterpart funding of the project,” he added. 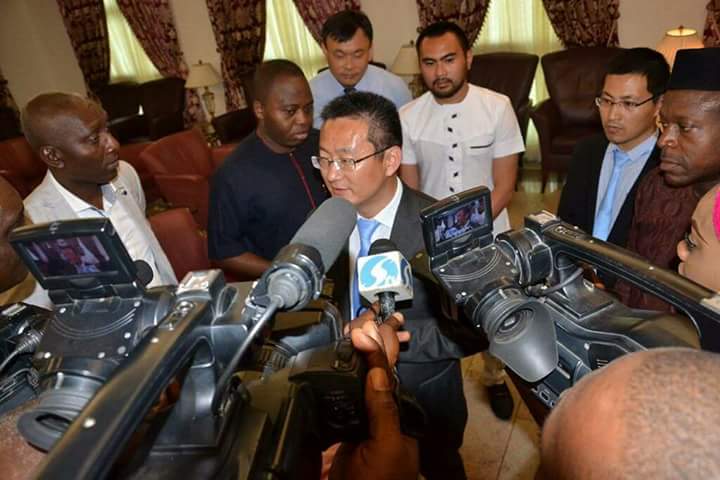 Akwa Ibom State government of Nigeria says a technology-based agricultural firm, Shandong Wuzgen Group, has arrived in the state to invest in the agric sector.

Commissioner for Agriculture and Natural Resources, Dr. Charles Inyang, who spoke after an interaction between the directors of the firm and Governor Udom Emmanuel, said the state government was determined to strengthen the agriculture sector through mechanised farming and ensure availability and affordability of food.

According to a statement by the state on Tuesday, the leader of the Shandong Wuzgen Group, Mr. Xiwen, expressed his delight at the investment opportunities in the state, while identifying areas of intended collaboration with the state to include large scale cassava plantation, maize and cashew cultivation.

He said, “As a large scale agricultural manufacturing organisation, we are targeting Akwa Ibom as the gateway to commercial farming in Nigeria, and we have come to confer with the governor and seek his support to enable us to partner in agricultural production.

“We also engage in the manufacturing of haulage vehicles from five to 30 tonnes, tricycles, ambulances, storage facilities and recycling of waste for industrial and agricultural use.”

The business consultant to the Group, Mr. Abdulraman Abdukari, said the degree of partnership would be a symbiotic one as the state government would provide the land and manpower, with Shandong Group providing the technology and market for the produce.

President Muhammadu Buhari has launched the Nigeria Economic Recovery and Growth Plan, ERGP, which seeks to restore the nation’s economic status following the high rate of inflation and recession.

The launch was undertaken shortly before the commencement of the meeting of Federal Executive Council, FEC, inside the Council Chamber, Aso Rock, Abuja on Wednesday.

The launch was attended by all cabinet members as well as top government functionaries including the national chairman of the governing All Progressives Congress, APC, John Odigie-Oyegun; Senate President Bukola Saraki; Speaker of the House of Representatives, Yakubu Dogara; and chairman of the Nigeria Governors Forum, NGF, and Governor of Zamfara State, Abdulaziz Yari.

The president said the ERGP focuses on agriculture with a view to ensuring adequate food security as well as energy, industrialisation and social investment.

He said the ERGP is an ambitious plan that seeks to achieve a 7 per cent economic growth by the year 2020. He said the aim is not just to remove the country out of recession, but to put it on the path of strength and growth, away from being an import dependent nation.

“We must produce what we need,” he said.

Mr. Buhari also said the ERGP clearly sets out what his government is committed to doing by creating an environment for businesses to thrive.

He called on state governors to draw inspiration from the plan and articulate their own plans that will lead them to real growth.

Speaking earlier, the Minister of Budget and National Planning, Udo Udoma, said Mr. Buhari has right from his campaigns shown commitment to changing Nigeria in a fundamental way. He said the ERGP is the president’s fulfilment of his promise to reinvigorate the Nigerian economy.

The minister said while the ERGP is being launched on Wednesday, the plan has put together in “one place, for easy access, all the sectoral plans that the government has been working on, from inception, including the strategic implementation plan for the 2016 budget.”

He said many of the initiatives in the plan are contained in the 2017 budget proposals which were submitted to the national assembly last December.

“The broad objectives of the ERGP are to restore growth, invest in our people and build a globally competitive economy,” he said.

The minister also said Mr. Buhari has already approved the establishment of a unit in the presidency that will monitor the implementation of the plan.

In their goodwill messages, Messrs. Saraki and Dogara pledged the cooperation of the National Assembly to the implementation of the plan.

Operators in Nigeria’s mining industry will benefit from the N30bn Mining Intervention Fund approved by the Federal Executive Council, the Minister of Mines and Steel Development, Dr. Kayode Fayemi, has said.

Fayemi said this while inspecting quarrying facilities at CIBI Nigeria Limited’s quarry site in Buruku, Kaduna State, according to a statement issued in Abuja on Wednesday by the Special Assistant (Media) to the Minister, Mr. Olayinka Oyebode.

The minister also disclosed that the miners would also benefit from a mining loan being sourced from the World Bank.

He said the ministry had entered into a partnership with the Bank of Industry to offer loan facilities from the intervention funds to serious operators who were already producing and who required assistance to increase the scope of their operation.

He stated that companies engaged in the production of quality tiles would benefit from the fund in order to help increase their production, compete favourably, and help reduce the nation’s dependence on imported tiles.

“We are working with the BoI to disburse the loans as soon as the intervention funds are released to operators,” Fayemi said.

He said the companies like CIBI Nigeria Limited would have been able to produce more than 200,000 square metres of tiles it was currently producing annually from dimension stones, if adequate resources, including finance, equipment and others were available.

According to the minister, Nigeria needs about four million square metres of tiles annually, adding that all the local tile producers could only come up with less than a million annually.

He stressed the need to support local operators as captured in the Mining Road Map drawn up by the ministry.

The Chairman, SIBI Nigeria Limited, Mr. Nuhu Wya, urged the government to support its project, adding that there was increased demand that it had the capacity to meet. 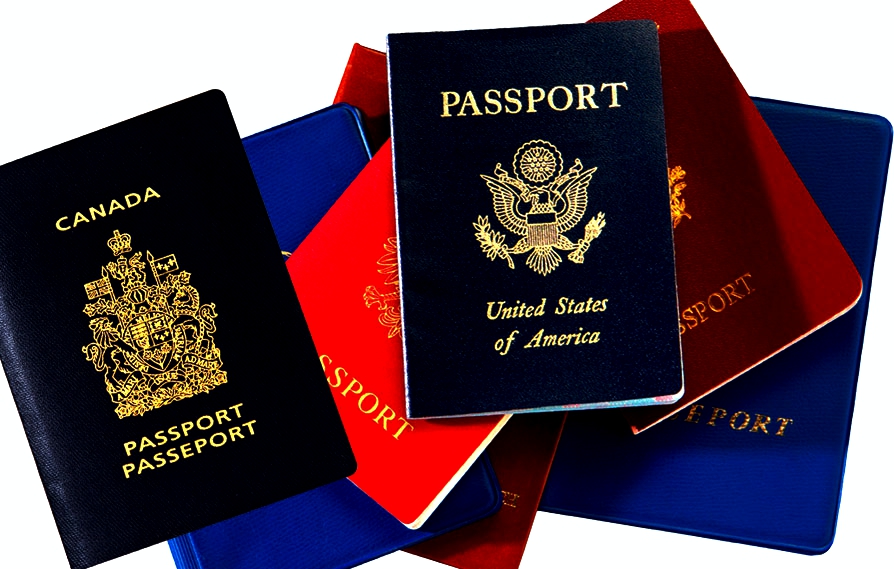 The Federal Government of Nigeria has reviewed the visa processes for foreigners who wish to visit Nigeria for business and tourism purposes, with a view to removing bureaucratic bottleneck and encouraging business travellers and tourists, thus giving a boost to the economy.

In a statement issued in Lagos on Sunday, the Minister of Information and Culture, Alhaji Lai Mohammed, said the measures were part of the action plan for the ease of doing business as well as efforts to boost tourism, within the overall context of the Administration’s economic diversification agenda.

”The Nigeria Immigration Service (NIS) has reviewed the requirements for Nigerian visas to make them more customer friendly, and details of this review are available on the NIS official website, www.immigration.gov.ng.Types of visas currently reviewed include Visa on Arrival (VoA) processes, Business Visas, Tourist Visas and Transit Visas,” the Minister said.

He said Tourist Visas are also available to foreign travelers who wish to visit Nigeria for the purpose of tourism or to visit family and friends while Nigeria Visa on Arrival is a class of short visit visa issued at the port of entry, and it is available to frequently-travelled High-Net-Worth Investors and intending visitors who may not be able to obtain visa at the Nigerian Missions/Embassies in their countries of residence due to the absence of a Nigerian mission in those countries or exigencies of urgent business travels.

“Re-issuance of passports for change of names due to marital reasons or lost cases have been decentralized to all State Commands and Foreign Missions to save passport holders from additional costs and inconvenience of travelling to the Service Headquarters in Abuja, while additional 28 offices have been opened for issuance of Residence Permits in Nigeria, bringing the issuance of Combined Expatriate Residence Permit And Aliens Cards (CERPAC) closer to the doorstep of employers of expatriates at all 36 states and FCT,” he said.

Alhaji Mohammed said the measures by NIS fit perfectly into the 60-day national action plan for ease of doing business in Nigeria that was approved recently by the Presidential Enabling Business Environment Council (PEBEC), as well as the Administration’s efforts to boost international tourism. EdoAbasi is seasoned in trade law and investment policy with a particular focus on investment law (guarantees and protection of investors), and investment facilitation. EdoAbasi also advises on customs regulations, export and import compliance, intellectual property, FDI, public-private partnerships, cross-border trade, JVs, and strategic alliances. He has helped businesses define corporate governance models and build partnering-specific deal processes. EdoAbasi earned a BL from the Nigerian Law School, an LL.B from the University of Uyo, and a BSc. in Project Management from the University of Jos. 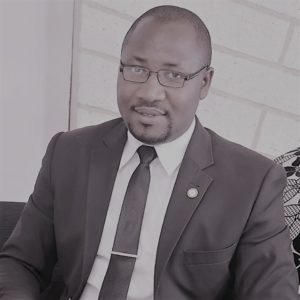 Paul has extensive experience in trade facilitation and foreign direct investment promotions and provides companies innovative support in the execution of industrial projects. His work has focused on building partnerships, alliances, and networks internally and externally that are crucial to creating seamless business development, investment appraisal, and investment aftercare for companies. Paul holds a BL from the Nigerian Law School and an LL.B. from the University of Calabar.